England have a Ton of fun with KP 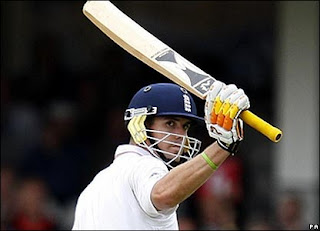 England have had a mixed day with the bat. It had started so well this morning with Alastair Cook and Ian Bell returning to the crease, after seeing off the South African attack of yesterday. But as with all good things concerning England of late, they come to an abrupt and disappointing end, and Ian Bell was out in the first five minutes of play.

But it wasn't all bad. Kevin Pietsersen secured his first century as England captain at the first opportunity. But his obvious jubilation provided the perfect distraction for South Africa to get him out with the very next ball.

Paul Collingwood, making a well-earned 59, succumbed to Kallis, who also dismissed Flintoff and Ambrose. Harmison's efforts at the end of England's innings was exactly what the doctor ordered - batting with sheer abandon, and seemingly without a care in the world, making his top score of 49.

The South African innings began with a dream start for England as James Anderson trapped Graeme Smith LBW in the first over, leaving the score 0-1. But Amla and McKenzie managed to avoid any more mishaps, and the score at end of play 37-1.


England must also be wary of the weather forecast (nightwatchgirl realises she's on shaky ground discussing the weather). Heavy rain is heading for London tomorrow, and with a lead of 85 runs, England are the team who are under pressure and in need to hurry this game up if they are to secure their first and only win of the series.


Tomorrow will be a big day. Stay tuned.
Posted by The Nightwatchgirl at 15:59