So Kevin was right all along: he is Captain Fantastic 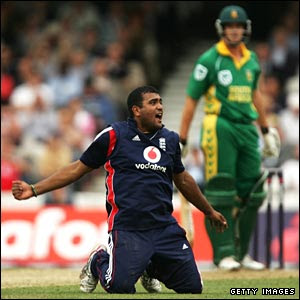 England beat South Africa today at the Oval by 126 runs, leaving England with an unreachable lead of 3-0 in the ODI series (out of a possible 5).
And what a great day of cricket. England had the all-round performance of a team that is well assimilated, highly skilled and hungry for success.
The England openers set about the South African bowlers like they were a broken cash machine spurting out free money. Bell (73) and Prior (33) gave England the start they needed to go on and score the runs with confidence. And apart from a little blip involving Pietersen (only 5, but who's counting at this stage?), Flintoff (78 not out and surviving a nasty smack to the forehead from a zippy ball) and Patel (31) ensured the total of 296 was always going to pressurise the South Africans after their Trent Bridge debacle.
The South African innings started exactly as England would have hoped, with Gibbs caught brilliantly by Shah for 12. And it seemed the task of getting 297 was just out of their reach. Apart from Amla (46), the rest of the South African batsmen failed to make any sort of indent in the run chase, as the required rate climbed to above 10 an over.
An obvious hightlight (and a relief) was that Morne Morkel did manage to find his way back to the Pavilion without the detour via the groundsmen's shed (Sat-nav installed in his helmet?).
The only downside for Nightwatchgirl was being sandwiched between three very annoying ten year-old boys who couldn't sit still (I blame the Fanta) and old men intent on filling in their scorecards (the cricket equivalent of Bingo).
Nightwatchgirl is also pretty lucky to still be alive, after a six hit by Albie Morkel made a beeline for the stand she was in. Luckily it was skillfully caught by a man in the back row with one hand (nice), saving Nightwatchgirl from certain death (chivalry still lives).
Still, with no rain, an ODI series under their belt and some brilliant and inspired performances from Flintoff, Patel and Harmison, Nightwatchgirl feels that today has been a great day for KP, for England and, frankly, karma from the Test series.

Posted by The Nightwatchgirl at 19:01

Great to see a feel-good-factor to the one day team, even if Pietersen has only had three matches, and good to see new players like Patel making their mark.

I'm interested to see if Patel can score runs at this level - with a first class average of 46, and clearly useful bowling, he could force his way into the test reckoning with some good innings in the one day side.

Samit Patel is a "Nightwatchgirl One to Watch."

Impressive with the bat, ball and an eager beaver in the field. Top marks all round.