All's Fair in Love and (a) Draw 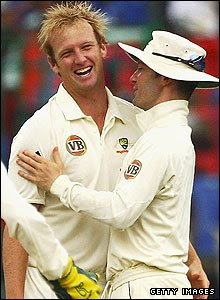 The First Test between India and Australia ended in a draw. A slight anti-climax given the rivalry and history of these Test nations. But there were some interesting points and some insightful comments by both sides after the end of the match.
Ricky Ponting, ever the modest captain, declared that Australia "dominated this Test match." Oh Ricky. When will you ever learn? To dominate is to win and to win means bowling out the side before they reach your total. Does Nightwatchgirl have to explain everything (and especially to a captain, surely he should know the rules by now)?
What was evident was Australia, on a fifth day pitch, couldn't get their "spinner," Cameron White to take the advantage as they "didn't create enough opportunities," Ricky - it's the opportunities that win you a game. India may have played out for a draw, which NWG considers to be fair enough, but Australia failed to win.
But it has been Zaheer Khan that has let his tongue run away with him (though he did win man of the match, his excitement, like a little puppy, is understandable) by declaring that Australia "can't take our [India] twenty wickets. They couldn't get me and Bhaji out, what else do you want?" Oh Zaheer. Never, ever anger the beast. Waving the red flag in front of Australia is always a bad idea. Keep quiet and mysterious. Stare at them with scary eyes. Bowl them round their legs, but don't intentionally wander in to the bullfighter's ring with a limp and a cold against Australia. You're just asking for trouble. They're aggressive enough as it is, without any encouragement.
The Second Test starts on Friday in Mohali and NWG can guarantee that there will be many rude words spoken, many bouncers aimed for the head and plenty of eyeballs at dawn. Will Australia's bowling attack let rip or will India's previously so reliable top order batsmen collect the runs to push Australia out of the game?
Now it gets exciting.
Posted by The Nightwatchgirl at 10:17

It is now blamed on bad light, umpires and a "serial offender".
Oz media slam Ganguly for delaying tactics in 'farcical draw'

its not that they themselves averaged a run rate of 2.5(ish) through out the match - and failed to get two bowlers out in one full session.

And as if the Aussies have never taken the bad light themselves!

Ricky's got half a point, we dominated many sessions in the game.. if only we could have dominated session 3 on day 3, and session 2 on day 5 then we could also be dominating the series.

As it stands however, 0-0 and Australia still hold the trophy ;) Could it be that the Bangaluru pitch suited Australia more than the remaining wickets will? Or will it be that Australia has now acclimatised to the conditions? Should be a good series.

At the end of this clip there's an excerpt from Zaheer claiming man of the match, comedy gold.

To blame poor light, umpires and the serial offender is like behaviour of a sore loser.

Except that in this case it was a draw.

I warned Sehwag about pricking the beast before the test but no one listened.

Pricky does get carried away a lil bit but overall I think Aus did dominate the game.