England Get the Runs (finally, but unfortunately) 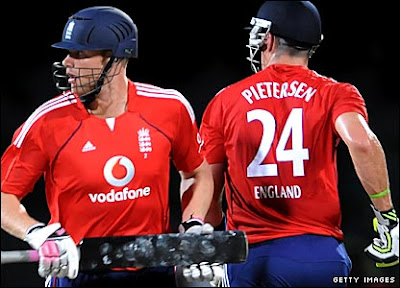 The second England Twenty20 match went with a bang, a yelp and pint of milk of magnesia. There was no lack of trying from the England batting line-up; no one can argue that they don't want the joy and pride only achieved after a win in the Stanford series (wait, Nightwatchgirl didn't mean joy and pride, she meant a growing bank balance, a new car, an extension and a small charity donation - not necessarily in that order).

The game was not the most exciting ever witnessed by NWG, although she appreciated how close it was towards the end. Free hits that should have been launched in to the lucky crowd were missed, KP messed around too much deciding which way he wanted to hit the ball, whilst also checking whether his wife was being accosted by the host and Flintoff failed to live up to his batting potential (and could possibly be bloody injured. Again).

And, along with the stomach bug that has ripped through the England camp (NWG wonders who will be feeling ill on Saturday. Her guess is that all symptoms magically disappear), England still looked pretty scrappy in the field.

Still, Nightwatchgirl does not want to be too picky. England won and that surely is the most important point. Harmison, Collingwood, Patel and Bopara got a bowl. Pietersen got some runs. Catches were dropped....

But whichever way Nightwatchgirl looks at this series, it still feels like England are selling their soul to the cricket devil. Perhaps Saturday will be more exciting. Perhaps Saturday will prove England are a side that want to win, not because of the money but because of pride and glory. And hopefully there will be a tie at the end of the forty overs, because Nightwatchgirl likes the sound of this extra magical over, where it becomes a mini match; anyone could win. How would you like that kind of pressure?