Day 1 for NWG At The Oval

NWG has just returned from a fun, but cold day out at the Oval. And she had a pretty good time.
Scotland did pretty well. But no surprises there.
But the West Indies. Oh the West Indies. Or should that be, oh Australia, didn't they really underperform?
Chris Gayle was unstoppable. Ricky Ponting was, well, average, scoring a total of.....0.
And NWG found herself feeling a tiddly (really tiddly) bit sorry for Australia. There can only have been 10% Australian fans there. Ahhh. And everyone else was cheering every mistake, every misfield, every West Indian run. It didn't take long for those feelings to subside. Perhaps a good second.
Tomorrow NWG is back at the Oval to see England v Pakistan and South Africa v Scotland.
Posted by The Nightwatchgirl at 18:11 7 comments:

And so it begins.
NWG could have coped with losing to Pakistan on Sunday. She could have coped with losing to any other team in the world, but the Netherlands?
Why?
How?
Well, to answer why - it's because England were rubbish. They scored a good number of runs, a total that should have been defendable.
And to answer how - well, pretty easy on that one. Ineffective bowlers. Bad fielding.
This does not bode well. NWG was all excited about this tournament; not that England could or would win, but that they would at least make an effort.
Complacency is the devil.
KP should have been playing.
Ryan should not have.
And NWG orders Stuart Broad straight to fielding practice and to learn the right and wrong times to aim at the stumps. She remembers the last time England lost on overthrows (against NZ, this time Swann was to blame).
Let this never happen again.
Ever.
Posted by The Nightwatchgirl at 00:40 7 comments:

And So It Begins

Today is a special day.
It's cold. It's cloudy. It's grey. It's been raining.
Which must mean one thing:
The cricket Twenty20 World Cup begins today.
What will happen? Who will win? Will any games actually take place because it may rain for two solid weeks?
So many questions and they will all be answered in slow, excruciating style.
NWG can't wait.
Posted by The Nightwatchgirl at 14:52 7 comments:

Labels: Nightwatchgirl, the weather will be awful, World Twenty20

Oh dear.
NWG has been struggling to write this post as her heart has been bleeding non-stop (turns out plasters aren't really suitable for serious blood loss).
Andrew Symonds has been sent home (most likely in the designated naughty seat on the plane - NWG thinks that must be at the back, near the toilets) for more bad behaviour (this time though, it was the 'last straw').
No Twenty20 for him. No Ashes for him. Most likely, no more cricket for him for Australia. Ever again.
NWG has been in a car all day driving here, there and everywhere and this has provided her with plenty of time to think what it was Symonds could have done (as no one is yet to say - imagination is a curse).
Possibilities include:
Stealing a barge and fishing on the Thames whilst a bit....happy.
Driving to Birmingham to repent his sins for deciding to play for Australia and not England....whilst a bit happy.
Paying to have his fishing boat flown over from Oz on the Cricket Australia credit card....whilst a bit happy.
Telling Ricky Ponting that he wishes Glen McGrath was still in the team because he doesn't like any of the other players (especially Pup for his youthful good looks)....whilst a bit happy.
Continuously rolling cricket balls at Mitchell Johnson's feet for three straight hours....whilst a bit happy.
Going out in London with Shane Warne. That's it.
Which one could it be?
Posted by The Nightwatchgirl at 17:57 1 comment:

So England had a warm-up game.
They won.
That's the good part (and KP remembered how to bat. Also definite plus point).
But, Collingwood said:
"We've come out thinking we've got a lot left in the tank."
NWG should hope so. England have only played one game and they have about 400 to go this summer.
NWG thinks if you've got nothing good to say (or sensible) don't say anything at all.
Simple.
Other phrases to be avoided:
"At the end of the day."
"Ah look."
"We played a good game."
"We don't mind losing."
"I'm hungry."
"Freddy's injured his little finger."
"Cricket's a bit boring."
"At least the sun's out."
"At least it's raining."
"Twenty20 doesn't really count for anything."
"Hi mum."
Posted by The Nightwatchgirl at 13:51 2 comments:

NWG is very lucky. She has lots of tickets for lots of games for the Twenty20 World Cup. All week she's been worrying about what the weather will be like, if she has good seats, if England will do well (we all know the answer to that, but it's still a worry).
And then today she received an email from Ticketmaster.
And it was not a friendly one.
First there was this:
Alcohol, metal cans or glass containers may not be brought into the ground at any time due to ICC regulations. For match days at Lord's please refer to the Lord's website (www.Lord's.org) for the ground's specific regulations in this area.
Then there was this:
No large flags / banners, sticks or poles are allowed into the ground.
And, to top it all off, this:
The Event Authority reserves the right to refuse entry to any person carrying or wearing any other items or substances that may be deemed to be offensive, disruptive, dangerous or likely to infringe any party's rights or any party's safety or security or any dangerous article or substance not referred to above. The Event Authority also reserves the right to deny entry to any person who in the opinion of the Safety Officer posed a threat to the safety of spectators in the ground or whose presence posed a threat to public order.
Cricket is supposed to be fun. There should be banners and flags.
Cricket is supposed to be about the sport and having a drink comes a close second. Do the grounds stop you drinking alcohol? No. They just want to make sure you buy it all in their bars for more than it's worth.
This is wrong.
Posted by The Nightwatchgirl at 19:45 8 comments:

Labels: beer, Cricket is supposed to be fun, ICC, Nightwatchgirl

You Can't Wear That On A Cricket Field Boys 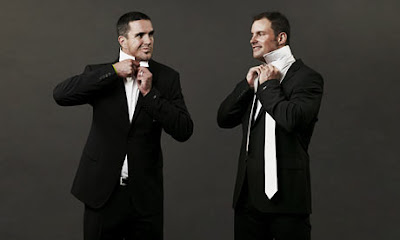 NWG understands why KP and Strauss look so happy.
Hussey is intent on helping England out by purposefully aiming a cricket ball at Ricky Ponting's wrist (all of England thank you for that).
Now all that needs to happen is for Mitchell Johnson to have a little mishap (insert appropriate strange action that can cause injury).
NWG lives in hope.
Posted by The Nightwatchgirl at 12:55 2 comments: