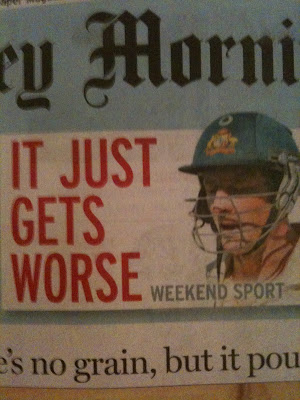 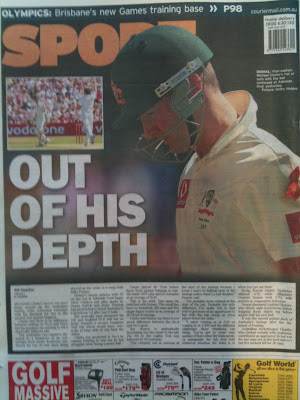 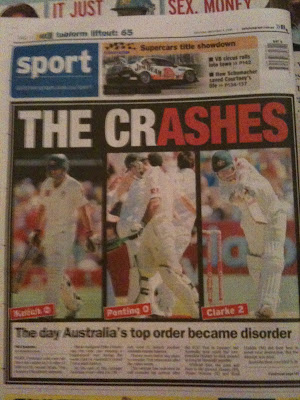 Australia have had a horror day in the field. It's been 36 degrees, blue sky and a couple of batsmen who are hungry for runs.
Apparently Alastair Cook has only had 11 overs off the field FOR THE ENTIRE SERIES.
His mother obviously stopped feeding him before he went away. Thanks Mrs Cook.
NWG also thought that although it may be cold and snowy, these pictures ought to cheer you up. She also listened to the commentary today on ABC and never before has she heard a bunch of Australians so sad and gloomy.
It makes her happy.
Posted by The Nightwatchgirl at 09:04 4 comments:

Labels: 2010 will be the year for England., Ashes, Australia, Nightwatchgirl

The Powerful Mind of Shane Watson

"I tried to make a loud call and it just didn't come out."
- Shane Watson on having Simon Katich run out for a (who knew?) diamond duck.
Posted by The Nightwatchgirl at 06:48 4 comments:

Thanks, but no thanks.
Posted by The Nightwatchgirl at 00:15 5 comments:

Labels: 2010 will be the year for England., Ashes, Australia

Thanks, but no thanks.
Posted by The Nightwatchgirl at 00:08 No comments:

Labels: 2010 will be the year for England., Ashes, Ricky Ponting

Well, England didn't want to win the toss anyway....
Posted by The Nightwatchgirl at 23:40 1 comment:

Dear Mosquitoes,
NWG would like to inform you that she has no blood left for you to suck. Please kindly find other sources of food.
Yours sincerely,
NWG
Posted by The Nightwatchgirl at 11:27 2 comments:

The Mo Is Gone

Farewell little Mo. You kind of reminded NWG of a '70s actor of the night.
So did your bowling.
For Mitchell has been dropped. In to a cold, dark room. Filled with Australian hasbeens, Kangaroo soft toys and blow-up crocodiles.
NWG is in two minds.
Yes, he was bad during the Brisbane Test. He didn't bowl well (now Steve Harmison can rest easy knowing Mitchell's bowling was worse than his), he didn't score any runs, and he can't catch.
But on the other side, he would have been good to still be in the side for England's sake.
NWG is currently in Daintree, in the far north of Queensland. Surrounded by rainforest, insects, birds and more mosquito bites than she would care to mention, she had initial concerns that she would be too far away from anywhere to get updates on tomorrow's cricket.
But, thankfully, not only does she have broadband (0h the modernity), she also has access to channel 9, one of only two TV channels up here.
So tomorrow, instead of seeing the rainforest, looking at crocodiles and generally being at one with nature, she will be inside, curtains drawn, keeping an eye on the England team.
Go England.
Posted by The Nightwatchgirl at 04:54 No comments:

Labels: 2010 will be the year for England., Ashes, Australia, Mitchell Johnson, Nightwatchgirl

The End Of Test Number One

NWG could be no prouder.
Yes, she's been stuck on a boat all day, but as soon as she was back on dry land, she ran straight to find out the score.
And who would have thought it?
Alastair Cook: You, sir, are a special man.
NWG could not believe what happened at the Gabba the last two days. And she couldn't believe the list of records that have been smashed.
It is England's winning draw. And it is Ricky's scar that is starting to throb.
Bring on the next Test.
Posted by The Nightwatchgirl at 07:47 2 comments:

Labels: 2010 will be the year for England., Alastair Cook, Ashes, Australia, Nightwatchgirl

Alright, NWG exaggerates. There are some words:
Amazing.
Brilliant.
Inspiring.
Necessary.
The perfect medicine for the confident Australians. NWG wishes she was still at the Gaba.
And you know what NWG is doing tomorrow? No, not sitting inside watching the cricket. She picks tomorrow to go off on an island cruise thing in the Whitsundays.
Why?
She is going to miss it all.
Posted by The Nightwatchgirl at 09:15 No comments: