So they've decided to play bingo with the Australian team, and guess who had two fat ladies?
(88) Mitchell Johnson. Dropped for playing badly, has not played a game in between the last test and the next one, and reinstated.
(23) Philip Hughes. That's it really.
(19) Michael Beer. Who?
(7) Steve Smith. If only Australia could find some grown ups to play in the team.
Posted by The Nightwatchgirl at 06:17 2 comments:

KP, A Lamborghini And The Australian Police

This is exactly as Shane Warne had planned.
(Shane's mind).
I know, I'll get KP a fast car, make sure it's yellow so the police can really see it, then just sit back and wait for him to be jailed.
Well, Shane, your plan didn't work. KP only got a ticket and the eternal shame of driving a yellow car.
But still. It's not responsible for an English player, namely one that England require UNDAMAGED, to be let loose in a racing car. The Australians are, in a very polite way, rubbish drivers.
Just think what could have happened.
Andrew Strauss, NWG implores you to be extra careful with the England team. Do not let them do silly things. Keep them where you can see them at all times. Don't let them swim alone. Don't let them walk in the bush alone.
Just keep them with you.
Posted by The Nightwatchgirl at 06:12 1 comment:

Labels: 2010 will be the year for England., Andrew Strauss, England, kevin pietersen is a bad man, Nightwatchgirl

Who Goes? Australia Should Decide.

The moment of truth is upon us all readers.
Well, not really those that read NWG's ramblings, but those who live in these shores. (Australian shores that is).
The press is talking non-stop about who will get the chop from the team (and injuries).
1. Well, an obvious one but Katich is out. England found his achilles, which was helpfully where his achilles was and he's now out for the series.
2. Xavier Doherty. Apparently not a Test spinner anymore (ten days ago he was the future of Australian spin, NWG doesn't know what this now means for spin in Oz). 'Nathan - all is forgiven' shout the wombats and various other species in Australia.
3. Doug Bollinger. No sooner was he in, and now he's supposedly out. Not fully cooked, so say the radio lot.
4. Marcus North. NWG doesn't really understand why he was in the side in the first place. He couldn't really bat, he can't really bowl and he's not a great fielder. Seems anyone can get in to the side these days.
5. Ponting......?
NWG firmly believes that there should be a phone vote a la Big Brother to decide who should be evicted from the team, with some humiliating live vote-off (preferably in the MCG just for added tension).
Posted by The Nightwatchgirl at 09:36 1 comment:

Labels: 2010 will be the year for England., Ashes, Australia

Day Five: The Best Of The Lot

No, NWG was not sitting inside watching the game.
And no, she didn't have BBC TMS on listening to the old favourites.
And no, she didn't even have Channel 9 and Shane Warne moaning about how unfair it all is (which, by the by, he does ALOT).
All she had was bad radio reception on the radio as she was driving down tiny roads through (admittedly lovely) countryside as she made her merry way from Armidale (don't go there people) to the Hunter Valley.
But it kind of added to the drama (along with no internet access).
When she switched on this morning she was eager to get going.
And then it happened. Hussey was out.
And then it happened again, and again and again.
For today, in the eternal battle between England v Australia, England won. And not just by a little.
But by an innings.
And it was brilliant.
Posted by The Nightwatchgirl at 09:28 5 comments:

Labels: 2010 will be the year for England., Ashes, Australia, Michael Hussey

NWG has never heard any Australian praying for rain.
That was until today.
Where has the old Australia gone?
Posted by The Nightwatchgirl at 06:56 4 comments:

Labels: 2010 will be the year for England., Ashes, Australia, Nightwatchgirl 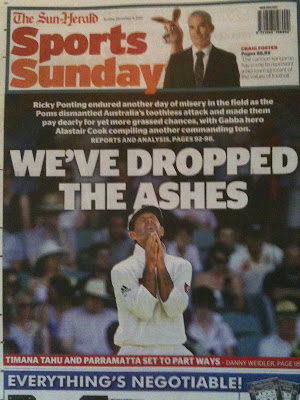 Posted by The Nightwatchgirl at 02:30 2 comments:

Labels: 2010 will be the year for England., Ashes, Australia
Newer Posts Older Posts Home
Subscribe to: Posts (Atom)
Nightwatchgirl is in her test whites